Giants Steps In Art Therapy: Toss of the Dice 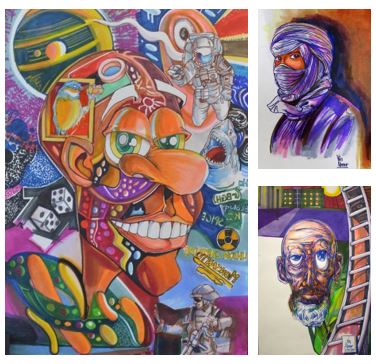 Wednesday, November 8, 2017
Vincent Abner is a U.S. Army Veteran who served from 1974-1980. He joined the service with the intention of having a long military career. His career was cut short when he sustained an injury that forced him to leave the military – the aftermath of which he still struggles with today. Despite his physical challenges, being in a creative atmosphere like Giant Steps provides release from the agony that he experiences daily.
Of his art, Mr. Abner says, “I have a passion for graphic art. As a child, I was obsessed with cartoons and comics—which turned into a love of graphic novels. To me, this style of art has always been a means of communication.”
His artwork entitled Toss of the Dice, a 2017 Bronze award winner in the National Veterans Creative Arts Competition, illustrates “…man’s need to dominate nature at any cost.” Prior to enlisting in the US Army, Mr. Abner had the belief that, “Going to a faraway country to battle an evil entity masquerading as human beings would be the most heroic commitment I could ever do for God, family, and my country.  My templates were the actors of my favorite war time television dramas such as Combat, Rat Patrol, and even Gomer Pyle. Basic Training was insane yet the truth of being a GI didn’t come to the surface until AIT training and conversations with fellow soldiers who experienced deployment to Korea and Vietnam shared their real life experiences. We discover that human life is expendable to those who send others to war and the reasons are usually foreign to the propaganda that we are fed by the news media.”
View Mr. Abner’s work here in our full screen gallery.
The Giant Steps Program is an arts-driven outpatient mental health program for Veterans connected with VA Connecticut Healthcare. The mission of Giant Steps is to promote the wellness and recovery of Veterans by providing opportunities for creative expression, and connection with others so they can rediscover personal strengths, manage stress, build resilience, enhance self-empowerment and find meaning and pleasure in their lives. New pieces will be added to this gallery monthly.
Contact:
Laura Spinelli, MA, ATR, LPC
Director, Giant Steps Program
VA Connecticut HCS
laura.spinelli@va.gov
Login required:
No
News Tags:
Community News