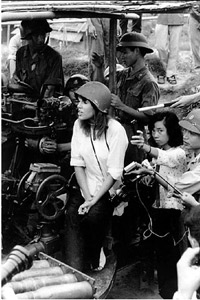 Ken Burns’ documentary on the war in Vietnam has caused some brouhahas in some of my email lists.  Those on the right say it’s typically biased because it’s broadcast on PBS and those on the left claim it’s just a documentary stating facts and showing photos and videos.  Those who served in Vietnam, more often than not on the right side of the political aisle, are remaining fairly quiet about the whole thing but admit to watching the series.  That’s more or less the category I fall into.   I’m uncomfortable watching the footage but still morbidly drawn to the television screen, watching American planes drop bombs on civilian targets that may or may not have harbored the Viet Cong and watching American GIs duck enemy fire.  I remember in our camp feeling the bombs of B52’s dropping tons of ordinance miles away from us but still causing the earth under our feet to tremble and making us shout out cheers for the Air Force.  “Go get ‘em Zoomies! Bomb the sons a b—–s!”  I listen to Vietnamese from both the north and the south tell horror stories of trying to avoid contact with Americans and I thought yeah, we were pretty much trying to avoid contact with you too.  I hear American GIs and Marines talk about their experiences in battles against the NVA (North Vietnamese Army) and the VC (Viet Cong) and then the documentary switches to the NVA and VC who fought against those very Americans.  It’s like watching a fast tennis game.  When the episode comes to an end I sit still for a minute and then erase it like a bad memory.

I’ve spent four decades feeling nothing but utter scorn and contempt for the vicious war protesters who greeted American soldiers returning home with taunts, jeers, and physical abuse. I’m reminded of the sheriff in Georgia who lost a son in Vietnam and was called every day by college war protesters telling him they were glad his son was dead.  To this day I will not watch a Jane Fonda movie or television program after her antics on a North Vietnamese anti-aircraft gun urging them to shoot down American planes.

I’ve also spent over four decades trying to fill my head with more pleasant things than my service in Vietnam.  Don’t misunderstand me, I’m super proud that I enlisted in the Army in 1967 and served with an elite all volunteer unit for nearly four years.  I’m a proud member of the Veterans of Foreign Wars, American Legion, Disabled American Veterans and of course the Yale Veterans Network.  But something is repeatedly coming to the surface in Burns’ documentary and that is that the troops were repeatedly lied to, both American and North Vietnamese, by their leaders with impunity and utter disdain (this was also brought out in the book “Dereliction of Duty” by West Point graduate, and current U.S. National Security Advisor, H.R. McMaster). With very few exceptions, every GI I served alongside of was always willing to go the extra step and made sure the mission was accomplished.  But was it all a lie and if so to what end?  Was putting American soldiers in harm’s way worth the political currency?  I will probably never know and maybe I don’t want to know.  Back to the lies from the politicians in America and North Vietnam: I could probably sit down and have a beer with an NVA grunt.  Not to have a discussion or compare notes but to simply clink glasses and say “peace”.