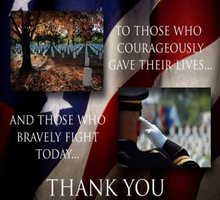 Memorial Day is a solemn day for all veterans and for a lot of us a sad day.  I never understood the barbecues and all of the white sales in the department stores and the Memorial Day parades that included antique cars and clowns.  All of this has become such an engrained as a part of Americana that it is perhaps sacrilegious to impugn it but I think I’m allowed to question it and maybe in the process enlighten some folks as to exactly what Memorial Day is.

Memorial Day is the day we set aside to remember those who died while in the service of their country.  Way back when it was known as Decoration Day, the day we decorated the graves of soldiers who had made the ultimate sacrifice in battle.  It is not Veterans Day which falls on November 11th which is to honor those who honorably served in the American military and are still with us today.  You would be surprised how many Americans including elected politicians who don’t know the difference and think these days are interchangeable.

For me it is a day of reflection and remembrance and sometimes I will tear up a little.  Not a lot, just enough to recognize the sacrifice of so many men and women who volunteered to put on a uniform and put their lives on hold only to have it all end so abruptly.  I salute them and their families and wish them Godspeed.

Since my retirement I have become a substitute teacher in two local high schools.  At first I was a bit disappointed that I wasn’t actually teaching, something I’ve done all of my adult life, but simply handing out and picking up assignments.  The other subs told me to put things in perspective and I did.  While subbing in a class the other day that was seniors only I asked the class in general if they had their college plans all planned out.  There were nods and some yeahs so I randomly asked a few students where they were going.  One girl said she wasn’t going to college but was going Parris Island to become a Marine.  That piqued my interest of course so I asked about her MOS.

She wanted to be part of security so that upon discharge she could go into law enforcement and be part of SWAT.   Now she’s a girl who still texts her friends and giggles because there’s a sub but come July on Parris Island she’ll become a woman and a Marine with a vision and a goal.  She’ll be a veteran and I’m so proud of her.  Godspeed to her as well.  She makes me proud and she should make everyone proud.