This Veteran’s Life: The Legs and Lt. Colonel Martha Raye 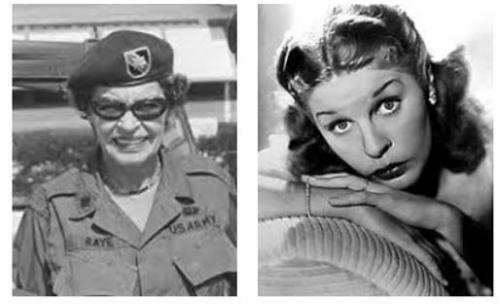 I didn’t celebrate but I observed the 50th anniversary of my enlistment into the United States Army on August 14th, 2017.  How do you celebrate that? You don’t, you just remember that day like your wedding day and you move on. Every so often I’ll think back on where I was during my four years in the Army.  Training at Ft. Devens in Massachusetts evokes a lot of good memories of Boston.  The college girls, those who would dare talk to GI’s, pub crawling and just walking around Boston Commons will always be sweet memories for me. But I would ship out to Vietnam in June of 1968 leaving Boston behind forever.  Or at least I thought so.

I pulled a year with the 9th Infantry Division in the Mekong Delta.  I’d never experienced that kind of heat and humidity in my life.  The first couple of months were oppressive and terribly fatiguing but then after a while your body adjusts and it sometimes almost felt normal. We acclimated to Hell.  My executive officer (XO) took me aside towards the end of my tour and noticed that I had orders to go to Germany.  I was hot to get out of Vietnam and stoked to get over to Germany.  The XO told me that if I went to Germany as an E4 I’d be pulling duty where I was painting rocks and picking up cigarette butts.  However, he said, if I extended my tour in Vietnam he’d pull me out of the field and promote me to E5 and then I could go to Germany and not worry about pulling crap duty.  Done.  I signed up to stay in Vietnam an extra six months.

After a one month leave in the States I returned to my company with the 9th and discovered that part of my being “pulled out of the field” entailed being part of a joint operation with the 5th Special Forces in Can Tho called Operation Leatherneck.  We were to hunt down deeply embedded Viet Cong forces in the Mekong Delta and destroy them by means of artillery and airstrikes.

Special Forces, or Green Berets, do not like working with “legs” or non-airborne units.  I was a leg as were my 9th Infantry Division colleagues. We stayed one night in the Special Forces barracks and the next day were asked to leave and find other accommodations.   We did.  We still worked with them for a month or so and they didn’t mind if we drank at their bar.  It was while Sergeant First Class Smith, my immediate boss, and I, a newly promoted sergeant, were having some drinks at the Green Beret bar a woman in camouflage fatigues came up to us to ask how we were doing.  It was the movie star Martha Raye.  Martha sat on the bar between Smitty and I who were on barstools and introduced herself and then asked the bartender for a Salty Dog. She wore a green beret and her camouflaged fatigues had jump wings, both American and Vietnamese, and her rank was that of a full colonel.  She also wore a caduceus which designated her as a nurse or a doctor.  It turns out she was a registered nurse.  Her Salty Dog arrived and I asked what it was.  She explained it was vodka and grapefruit juice with a salty rim and would I like to try one.  Sure, why not so she had the bartender make me one and she asked me why was my arm bandaged up.  A couple of days prior a fight broke out in our barracks and I tried to intervene which caused my thumb to be jammed up against a metal portion of a bunk and nearly broken.  I told her I was okay, it wasn’t a wound and that I’d be fine, thank you.  Smitty was still staring at her like she’d landed in a space ship and some Green Berets started to gather around because she was, well, Martha Raye.  She asked if I’d like to hear some songs and we all said absolutely.  She belted out “I Left My Heart in San Francisco” and a few others and I felt compelled to give her something back so I took off my Buddha medallion and put it around her neck.  A Green Beret standing next to me asked me “man, you sure you want to do that?”  He was right to ask.  A few months before I’d gone to Bangkok on R&R a day before my buddy Mickey was to arrive.  I went back to the R&R station the following day to pick Mickey up and while standing outside in the extreme heat I noticed a Thai sergeant hovering over his squad making them stand at attention despite the heat and humidity.  There was a street vendor near me selling beer so I bought one and gave it to the Thai sergeant.  He was sort of flummoxed and tried to stammer out his gratitude and instead reached to his neck and took off his Buddha medallion and gave it to me with his palms clasped in front of him.  I felt it was one of the greatest and most valuable gifts I’d ever received.  For her thoughts, her songs and for introducing me to Salty Dogs I felt that Martha Raye deserved it as much as that Thai sergeant thought I did.  Yes, I was sure I wanted to do that.