White Rabbit In A Foxhole 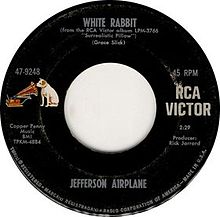 Aside from political turmoil and unrest I think the 1960s gave us the greatest popular music ever to accompany a generation.  I know, I get goose bumps watching a video of the Andrews Sisters singing “Boogie Woogie Bugle Boy of Company B” but they will never match Grace Slick and Jefferson Airplane singing “White Rabbit”.  Ever.  Or nor will they ever compare to anything, I mean anything, that came out from Motown.  Are you kidding me?  The Temptations, the Supremes, Smokey Robinson and the Miracles, Marvin Gaye and on and on.  God bless the Andrews Sisters but the music from the sixties blew them off the globe.  Simon and Garfunkle, the Beatles, the Rolling Stones, the Yardbirds, Spanky and our Gang and the list goes on almost forever.

Music was a nutrient during my military service just like food and water and cigarettes.  It allowed me and my brethren to think that even if we were at polar opposites of the political spectrum with those not serving we all enjoyed the same music and therefore we had something in common. That was never the case but it allowed me and others to clutch at a fantasy, to help us believe that we were still part of the American fabric in some sort of way.  We were naïve. I was naïve.

Whenever I was on leave I’d visit the town’s favorite watering hole Chester’s and while there I’d feed quarters into the jukebox to hear the latest Jackson Five or Rolling Stones hits.  It grounded me and confirmed that I was home if only temporarily but back on American soil and in civilian clothes.  Temporarily.

Without going into too much detail I asked to go to Korea after my year and a half stint in Vietnam.  Going to Korea would give me a five month drop on my enlistment as it was a hardship tour and I was ready to get out.  While home on leave I got a telegram at my parent’s home that said that the Army Security Agency (defunct since 1976) had decided that my services were required on Okinawa, not Korea.  That meant no drop on my enlistment.  I drove to Arlington Hall Virginia (we were too cool to be part of the Pentagon but more on that later) to argue my case.  In uniform I asked to speak to someone in charge of personnel.  A major came forth and I explained to him that I really wanted the five month drop and that meant I’d like to go to Korea.  My year and a half in Vietnam carried some clout and he said fine but I would have to do a month of electronic countermeasure warfare school at Fort Devens, MA and I said that was fine by me.  Another month stateside? Booyah! Horse trading works.

I made it to Korea and it was cold.  But to my mind it wasn’t Vietnam so it was all good.  After a couple of months I received orders to pack my bags and make it to Kimpo Air Base to serve back in Vietnam TDY (temporary duty).  When I arrived in Saigon I was asked where I wanted to go.  I requested my old assignment with the 9th Infantry Division but was told that Nixon had pretty much sent most of them home.  How about you ride instead of walk they asked.  I asked how and they said go to the 11th Armored Cavalry Regiment.  Okay, sure send me there.  This was April of 1970.

We invaded Cambodia in May of 1970.  We had our own radio station separate from the Armed Forces Radio Network.  It was WACR and we were allowed to use the jingles and all from that station in Mississippi.  All of the current hits were played and it felt like you were back in the states except you were on the Cambodian border in a foxhole.  Then I was sent back to Korea.

Back in Korea I began to reflect on what 20 months in Vietnam had done to me.  I was whole, pretty sane without much damage.  Something was missing though.  I turned on the Armed Forces Radio Network radio station and I heard the voice of Carmen Dragon, an American composer and conductor.  He carefully explained each piece of music and then played music that included Mozart, Beethoven, Bach and so many others.  I was in seventh heaven. It was peaceful and soothing and also thought provoking.  It calmed the savage breast.  It taught me Ralph Vaughn Williams “Green sleeves”, Beethoven’s 9th choral symphony and Mozart’s Eine Kleine Nacht Musik”.  It was peace and as I write this I’m listening to Bach’s six suites for cello.  It’s peace.