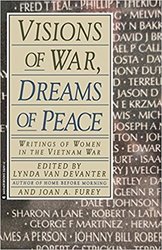 Featured recently on PBS’s THE VIETNAM WAR, we asked our guest columnist, Joan Furey, RN, MA, to expand on her military experience and perspective as Co-Editor of VISIONS OF WAR, DREAMS OF PEACE: Writing of Women In The Vietnam War. She shares more below.

The Poetry and Prose in this Anthology were all written by women, who, in one role or another, found themselves in Vietnam during the years of America’s involvement there.

Many were military nurses, others were employees of other government agencies, volunteers with the American Red Cross, or members of humanitarian groups.  A few were citizens of Vietnam, both North and South, who by their place of birth were dramatically impacted by the war.  In compiling this Anthology and getting it published (Warner Books, 1991), Lynda Van Devanter and I had no expectation that it would be a work of great literary importance.   It is not.  We believed then and believe today the poems and thoughts in this book have value beyond their literary quality.  They help people to understand the reality of war from a perspective rarely seen or acknowledged.

Our sole purpose was to share the voices of the many women who served in Vietnam and whose lives were irretrievably changed by their experiences.  To tell their “War Story”.

In the years leading up to the publication of this book, both Lynda and I researched the literature, looking for personal stories of women who had served this country in time of War.  We found few.  “Testament of Youth” by Vera Brittain, an English Nurse in WWI.  Written in 1933, it was the most available.  Denny Williams book “To The Angels”, about the nurses who served on Corregidor and Bataan during WWII, wasn’t published until 1980 and Lyn MacDonald’s “The Roses of No Man’s Land” about the British nurses who served in WWI was published in 1985.  This dearth of writing about women’s experiences in war left those of us who served in Vietnam isolated and alone with our thoughts and feelings.  How to make sense of it all?

In 1982, the dedication of the Vietnam Veterans Memorial in Washington, DC, provided an opportunity for many Vietnam Veterans to come together as one, to honor our fallen brothers and sisters, but also to reignite old friendships, share stories and perhaps – unexpectedly – begin to break down the walls of silence that so many of us had built up about Vietnam.  Thus, began a journey that resulted in the gathering of these works, as in the ensuing years, the women Vietnam Veteran community began to grow, to reach out to one another, and to share their most private thoughts and feelings that for years they had written about but were afraid to share.  Afraid that the rawness of their emotions or the depth of their feelings would leave them labeled as unstable, crazy, or mentally ill.  I am happy to say that that has not been case.  The response we received following the publication of “Visions” was overwhelmingly positive.  Veterans from across the country, both men and women wrote and thanked us and our contributors for sharing these very personal accounts of our experiences.  It helped many to recognize that they were not alone in their grief and sadness, that there was hope and help for them to begin to process what they had kept hidden for so long.

I wrote this poem on May 17, 1969, following the death of a young soldier I had been taking care of for the better part of a week.  He was a multiple trauma patient who had lost his R arm and R leg following the explosion of a booby trap while on a Search and Destroy and mission.  The R side of his face was pockmarked by shrapnel.  His name was Eddie.  I will never forget him.

By the time Eddie died I had been in country for 3 months, serving as a 2nd Lieutenant (Staff Nurse) in the PostOP/ICU of the 71st Evacuation in Pleiku.  Located in the Central Highlands of Vietnam, the 71st was the primary Military receiving hospital in the area.  I had, in that very brief time, seen more catastrophic injuries than I could have ever imagined.  Eddie’s death affected me very deeply.  It all seemed so useless.  Yet I had nine more months to go.

Legs ache, head throbs
Every muscle taut
Every nerve on edge
I want to scream but I can’t

Day after day, week after week
A parade.
What about his family,
his girlfriend—-his wife and kids.
He’s maimed, stumps where once
there was a leg, and arm.  A face even
adults will hide from.

Their future?
Mustn’t think of that.
It could tear you to pieces
giving them an identity
of more than SOLDIER.

He’s one, look at them all,
Those who died, those who left
blind, deformed, paralyzed.
Young men,
bright, handsome, funny.
Now sad and confused and wondering
Why Me?

I don’t know,
I can’t answer that.
I know it hurts, you have to expect some pain.
Why Nurse?  Why Me?

I’m sorry, it got to me today
I’m a nurse and maybe it shouldn’t
But it does, And I ask also
Why God?  Why?

ABOUT JOAN: Joan Furey, RN, MA, was a graduate of a 3 year diploma school of nursing when she served as a Lieutenant with the Army Nurse Corp in Vietnam in 1969-70.  She was a staff nurse at the 71st Evacuation Hospital in Pleiku, in the Central Highlands of Vietnam.  Following her service in Vietnam, Joan returned to school on the GI bill and received her BSN (Stony Brook University) and MA in Nursing (NYU).  She worked for the Department of Veterans Affairs for over 25 years and was the founding Director of the Department’s Center for Women Veterans.  She received the VA’s Distinguished Career Award upon her retirement in 2004.  In recognition to her service to veterans, Joan was inducted into the New York State Veterans Hall of Fame in May of 2015.  Joan was recently featured in the Ken Burns-Lynn Novick Documentary, “The Vietnam War”, which is currently running on PBS. Link to our Women In War photo gallery here to view images from throughout her distinguished career.