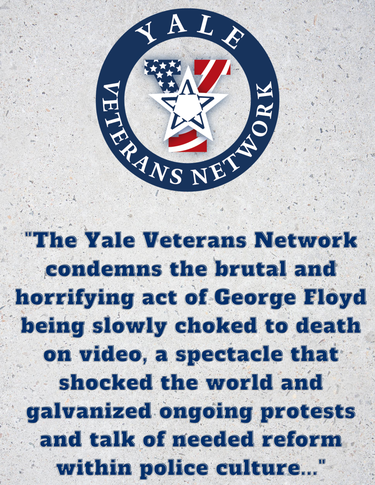 The Yale Veterans Network condemns the brutal and horrifying act of George Floyd being slowly choked to death on video, a spectacle that shocked the world and galvanized ongoing protests and talk of needed reform within police culture, as well as broader inquiries of what racism means in the United States as well as how to combat it.

As people who have experienced the trauma of dehumanization firsthand, YVN offers our empathy and comradeship to the Yale African American Affinity Group (YAAA), African Americans, Black colleagues, and all people of color in the United States who have been disenfranchised and brutalized by a system that was not designed for them and in some cases was designed specifically to exploit their labor.

Alone among the affinity groups, Yale Veterans Network is made up of people of all races and creeds who chose, deliberately, to be and identify as veterans. It is not a result of birth, or financial circumstances, or genetics; almost anyone can serve in the military, and for those who cannot owing to some physically disqualifying disease or condition, there are other ways to serve their country. Nevertheless, veterans are familiar with discrimination and unjust mistreatment as a group, by employers, by society, and occasionally, by police.

The single variable that makes America’s military so strong is its earnest commitment to racial justice within the ranks. The strongest units are those that live by the creed that every soldier is equal under law, and set apart from one another by their efforts and contributions. Everyone who served did so alongside soldiers of different ethnic and cultural backgrounds, and know how strong a united unit can be, or how weak a divided unit is. This is like living in the United States, which can be the strongest country in the world, or a very weak, divided nation.

There can be no question as to what the priority must be now as a society: to live up to the potential of a country based on humanism, the dignity of every person, and their rights as articulated in the Constitution and Bill of Rights. So long as there is a quiet culture that privileges some over many, or a few over all, there can never be the type of egalitarian and free America we’re promised. That starts with each and every one of us asking what we can do better as citizens and individuals.

Everyone can do something. Moving forward, YVN commits to working more collaboratively with the YAAA Social Justice Committee to advance learning and understanding via the YAAA speaker series, as well as advocacy efforts. We will use our voice collectively through our newsletter and through programming, and individually according to each member’s conscience, to build a more inclusive and equal community based on shared values of service and respect. We will call out instances of unacceptable behavior. We will not accept a status quo that leaves some colleagues and neighbors out in the cold.